Grindsbrook, with a Bit of Luck

Perhaps the last of our summer walks as the 8.49am train from Manchester Piccadilly snaked through the Pennines towards glorious Edale on Friday morning. Despite Thursday’s deluge, the weather had stayed true to a consistently optimistic forecast all week long. Dry, sunny and as warm as you’d want it to be for a gruelling lug up Grindsbrook Clough.

Our 22-strong group made pleasant introductions outside Edale train station as we braced ourselves for the task ahead. We passed over the start of the Pennine Way, instead opting for the more direct ascent of Grindsbrook Clough. As always, a healthy mix of new and old faces. Hardy veterans like Andy Ramwell, Nigel Crebbin, Roger Longden & Tamsin Caine. New faces included Mike & Emily Edge, Jill Burdett and Lahcen Kebdi.

There’s something magical about the Peak District in late August as flowering heathers tinge the lush green valleys in purple. With the sound of trickling waterfalls adding to the sensory delight, there’s every reason to take time, especially moving uphill.

That said, there was certainly no hanging about moving up Grindsbrook Clough – a light scramble that often catches out debutants expecting a countryside stroll. Challenging it might be, but it’s also overwhelmingly fun to pick your own personal path of least resistance through the sodden boulders. Halfway up, the final section of Grindsbrook looks highly impassable from a distance. “You’ve got to be joking, we can’t get up there can we?” said one Freshwalker. 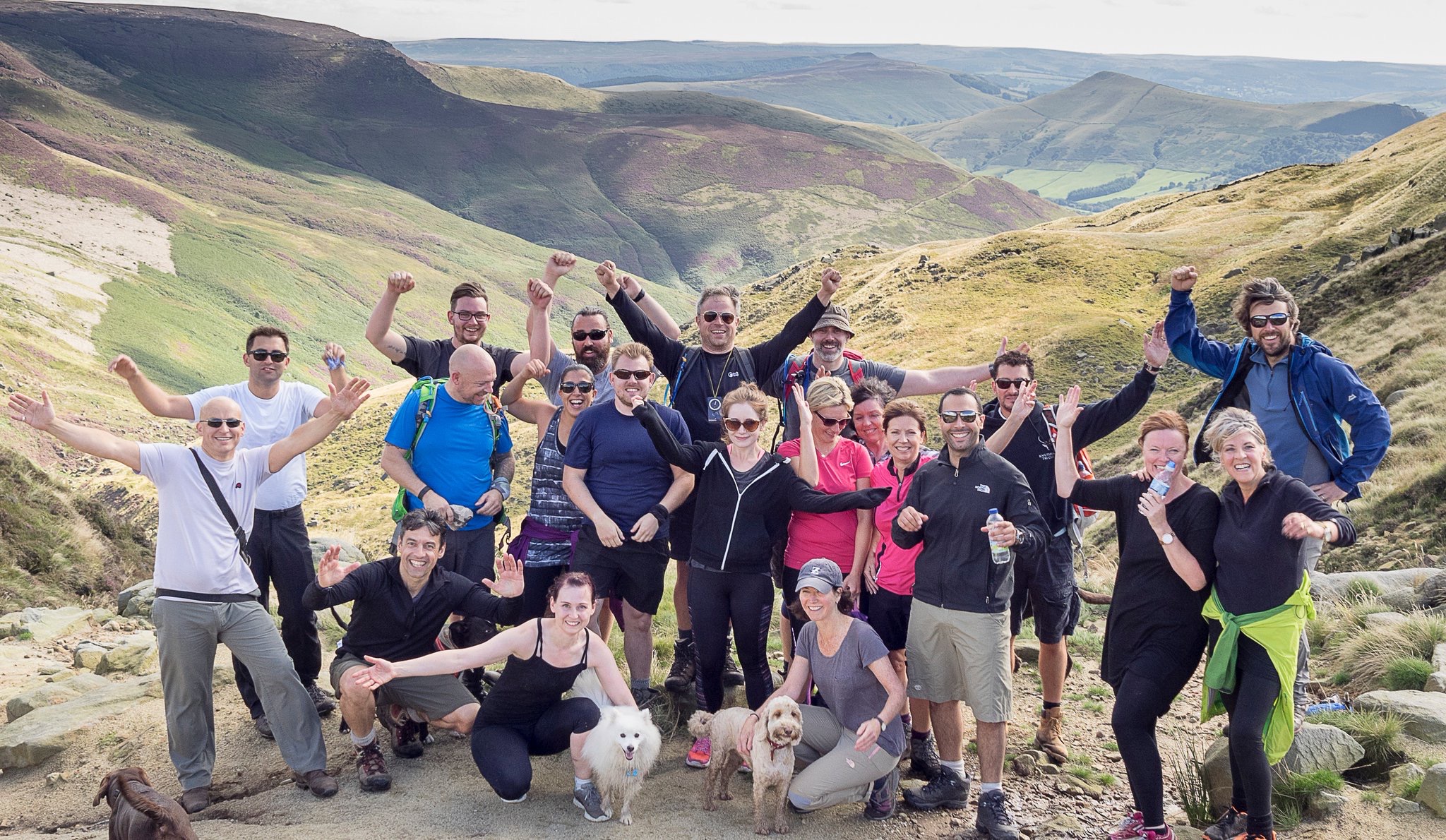 If you had to capture the essence of Freshwalks anywhere, it would be the final few steps at the top of Grindsbrook, where snarls turns to smiles and a rush of elation kicks in. A heady sense of achievement. There’s always need for a hug or two at the top for those who’ve really pushed themselves. Then, an extended and deserved break to rest limbs stretched out of comfort zone from boulder to boulder.

And what a place to recharge with breathtaking views back down the Edale valley to boot. A considered route extension around Grindsbrook Knoll was ignored as we took the clear path towards Crowden before heading north-ish across Kinder Scout. I say ‘ish’ because not for the first time, we made something of a pig’s ear trying to keep to this camouflaged path. To be absolutely clear, we zig-zagged (despite circular mutterings) our way across testing boggy ground until the blossoming streams of the River Kinder guided us towards the Downfall, our tried and tested lunch spot.

A quick bite to eat and reassurance that the afternoon ahead would contain no further curveballs. Plain-sailing now, folks. With possibly the clearest skies Freshwalks has seen to date, the gargantuan mountains of Snowdonia were just about visible due west on the horizon. 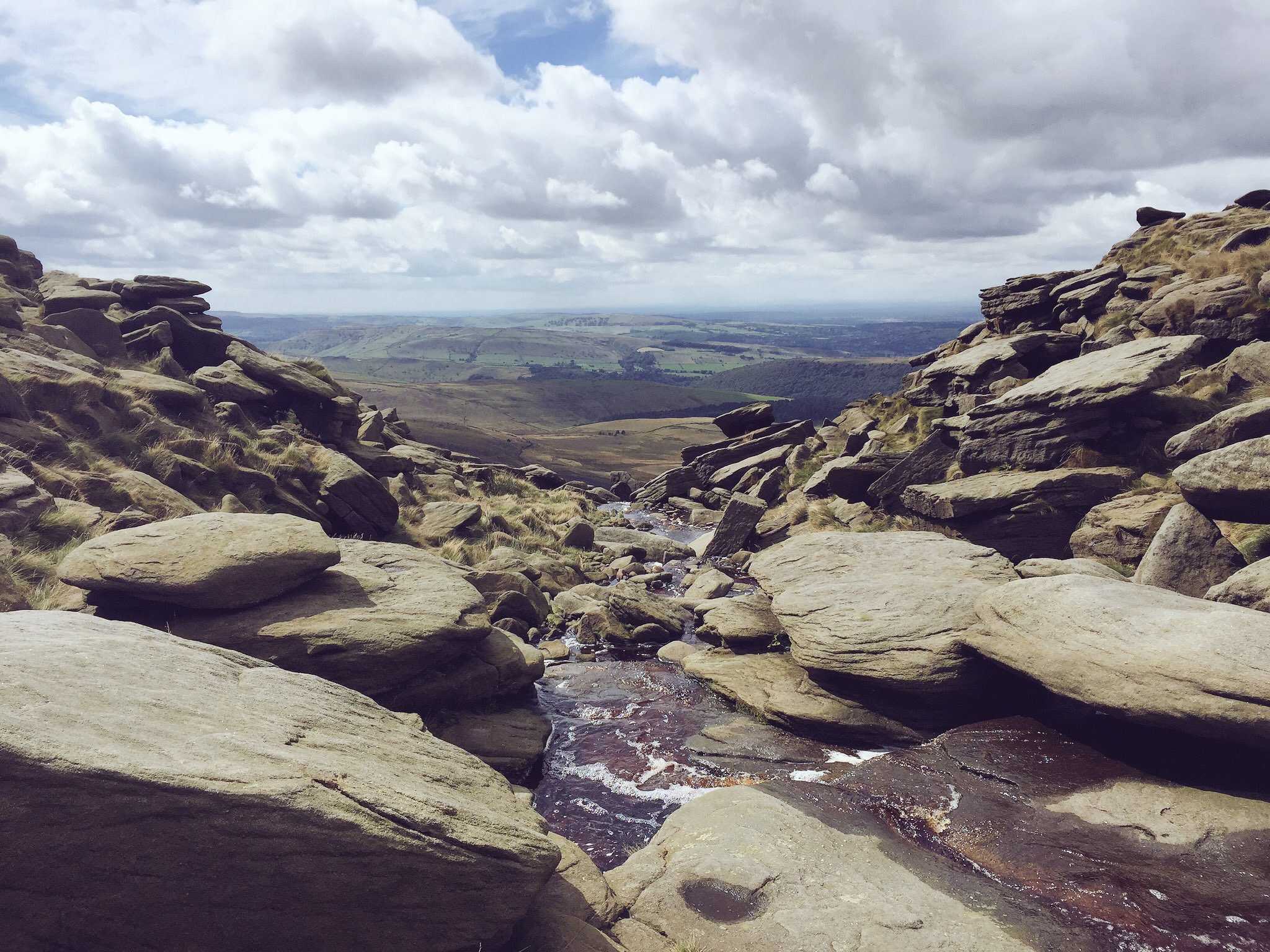 Unlike our last return trip from Kinder Downfall to Edale back in May, the weather made the return walk an absolute treat. We took the group past the 633m trig point at Kinder Low to convince ourselves we’d reached the highest point of the Peak District. What’s three metres between friends? 360 degree views from such a vantage point layered another sense of achievement. Thereafter mainly consisted of a knee-punishing descent past Edale Rocks and then back down the arduous Jacob’s Ladder.

It’s such a straightforward walk back into Edale village – guided by the Pennine way – that I allowed the group to break up. Nothing to worry about, until distracted by conversation, I looked up and realised half the group had missed a vital left turn at Upper Booth and headed straight for the main road back to Edale. No major damage done, but nobody really wants an extra trek at the end of such a day.

The beer garden back at the Old Nag’s Head was already in full swing by 4pm with the trailblazers such as Chris Fargher and Adam Mitchieson already squaring upto second rounds. There was plenty of time in this late August sunshine for a good few drinks, jokes and stories, some decent pub grub and a chance to sing Happy Birthday to one of our favourites, John Shinnick, who had turned 60 only the day before. You wouldn’t have believed it had you seen John bolt up Grindsbrook only a few hours earlier. 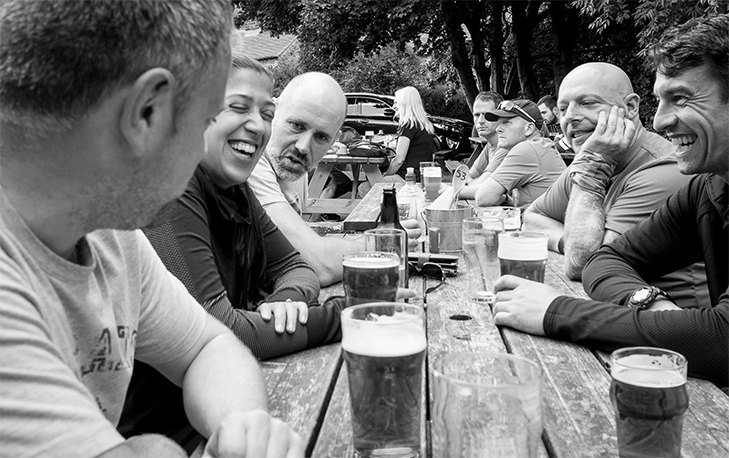 The last of us headed for a train back to Manchester sometime before 7pm. What a day in the Peaks; a glorious route, perfect weather and just lovely, interesting people.

If you like the sound of Freshwalks and would like to join us on a future walk please email Michael Di Paola on Michael@freshwalks.co.uk