Back to Bleaklow: Snowballs, Sushi & Sunshine

It doesn’t really matter how many events I organise, the night before will always major on excitement and minor on sleep. So I was a touch blurry-eyed, being the first to tuck into a tasty breakfast at Carluccio’s, Manchester Piccadilly, ahead of the third instalment of Netwalking on Friday morning.

I was really looking forward to this one.

Probably because I needed the walk myself. More likely because I now find it very easy to gauge how any particular group will work when put together and this attendee list simply oozed potential. Not many other occasions could bring together people from so many different facets of Mancunian business life. Who’d have thought Franco Sotgiu, owner of Solita Restaurants and at least a gazillion other ventures would make a ‘networking’ event?

Impressively, over half the original bunch were in the mix, there to guide and prompt nervous first-timers who themselves had generated enough excitement in the days prior. At the front of this mob, Glossop’s very own Man of the Year, and our tour guide, Thom Hetherington (Northern Restaurant & Bar / Buy Art Fair). Originally, it had been Thom who cajoled us towards the Dark Peak with the promise of an accessible base, stunning scenery and great pubs.

There were also dogs. Lots of dogs. And sorry, I should really know all their names by now. But a huge bow-wow to Dandy, Claude and of course, Jess. Around half the overall group eventually boarded the 9:46am leaving Manchester Piccadilly. The abiding memory of this train journey out to Glossop is a combination of school-trip style giddiness and dog aggro. A quick spot of segregation ended the bone wars and peace was restored. 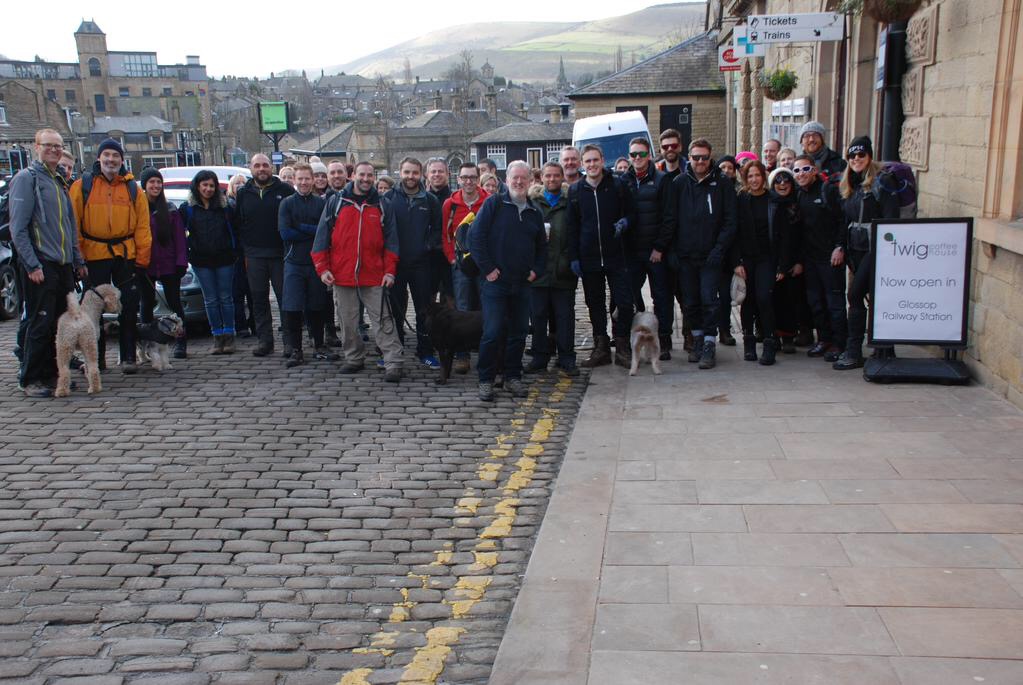 We arrived in Glossop on time to meet up with the rest of the gang who’d driven up or lived locally. After enjoying a quick brew in the train station cafe and a Danny Franks (SBS Networks) organised team photograph, we were off. More or less on schedule.

To look organised, I counted heads as the troops filed through the back streets of Old Glossop in the direction of more rural surroundings. I was pleasantly surprised with the low absenteeism rate as 45 of us started the trek. And even more surprised that the weather had come good. Chilly yes, but dry and with a hint of sunshine peeking through the clouds.

The planned route bore more than a passing resemblance to the inaugural Netwalking day back in August. A subtle tweak being to adopt a route north out of Glossop, heading past Glossop Low to give spectacular views down to the Longdendale chain of reservoirs. 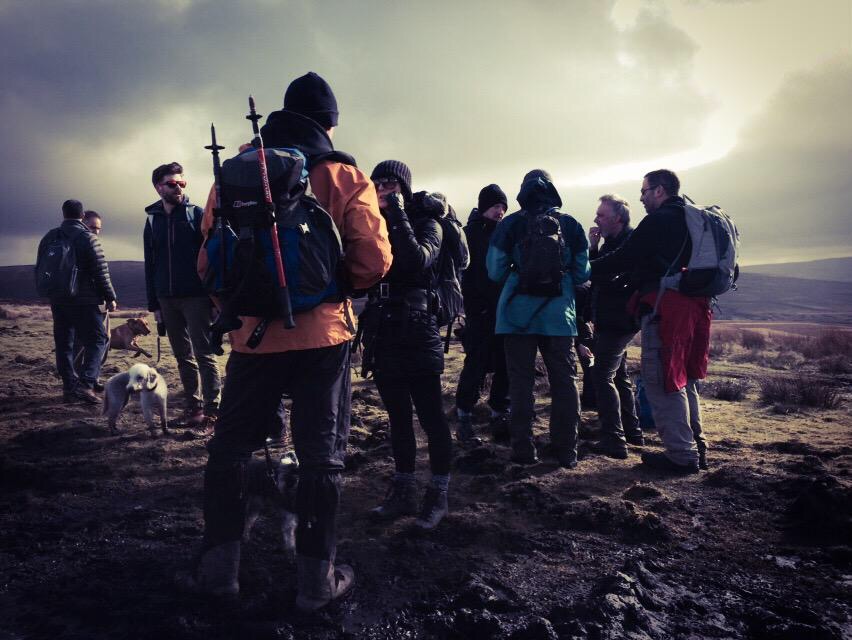 Given the numbers and diversity of walking speed, it was no surprise how much the group stretched out across the initial steep ascents of the day as we snaked our way towards our primary target of Bleaklow Head. Thankfully, patience at the front meant it would come back together every half an hour or so.

A mile or so shy of the peak, we found a decent spot for lunch and being Netwalkers, this wasn’t simply a case of some egg butties as Holly Moore (Make Events) reached for the sushi, stopping just short of popping open the champagne.

At 633m, Bleaklow Head is officially a mountain and stands the second highest point in the Peak District. The snow still resting in places, despite the sunshine, was proof enough of the air temperature and the temptation to throw snowballs proved too much for some. For the majority of our netwalkers, reaching the summit was a significant physical effort and something to celebrate as a group. 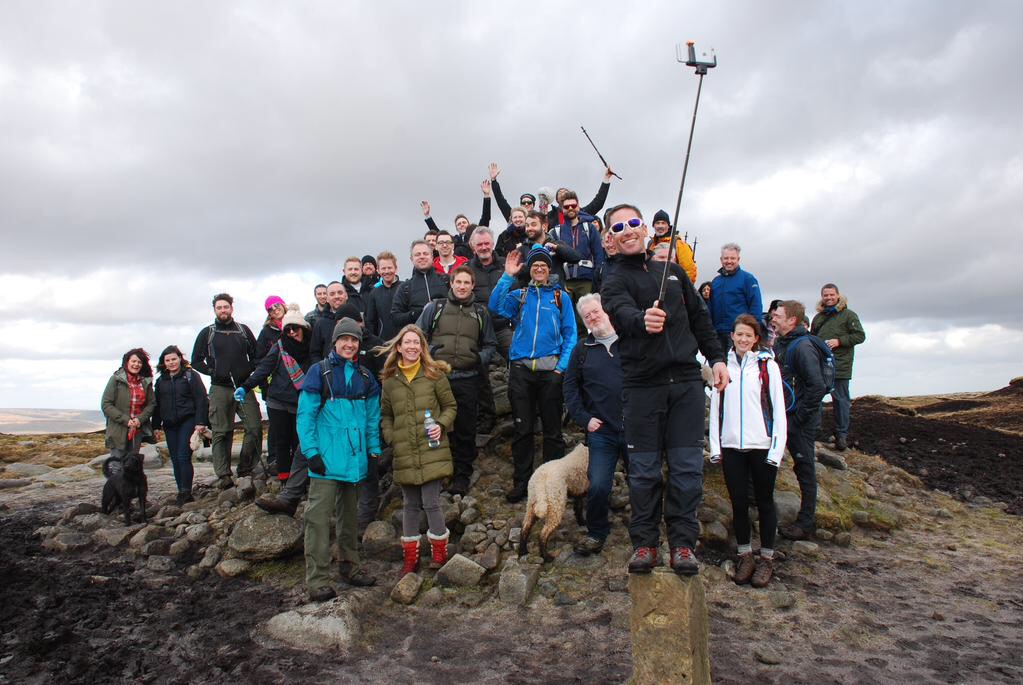 An appropriate moment now to highlight a key takeout from the day. The hills are a great people leveller. Away from the hustle and bustle of the city, business cards and job titles couldn’t be more irrelevant. Despite the impressive seniority of the group with over 30 of the 45 at CEO, Managing Director or business owner level, no such divisions mattered here. Sure, some sage advice was being passed from senior bods to more precociously titled attendees. But energy, potential and hunger was being absorbed in reverse. Everyone contributed.

From Bleaklow, we picked up the same route as the first Netwalking event, cutting off the Pennine Way to experience the stunning Higher Shelf Stones and the crash site of the US Air Force B29 Superfortress ‘Overexposed’ where 13 people lost their lives in 1948. In this most surreal location, you really need to take a moment to appreciate the sense of loss.

The route back into Old Glossop thereafter is quite straightforward, following the ancient Roman road, Doctor’s Gate along a magnificent valley. There’s a few hairy moments on the descent but everyone made it across the trickiest section in one piece, despite some vertigo sufferers and frisky pooches. 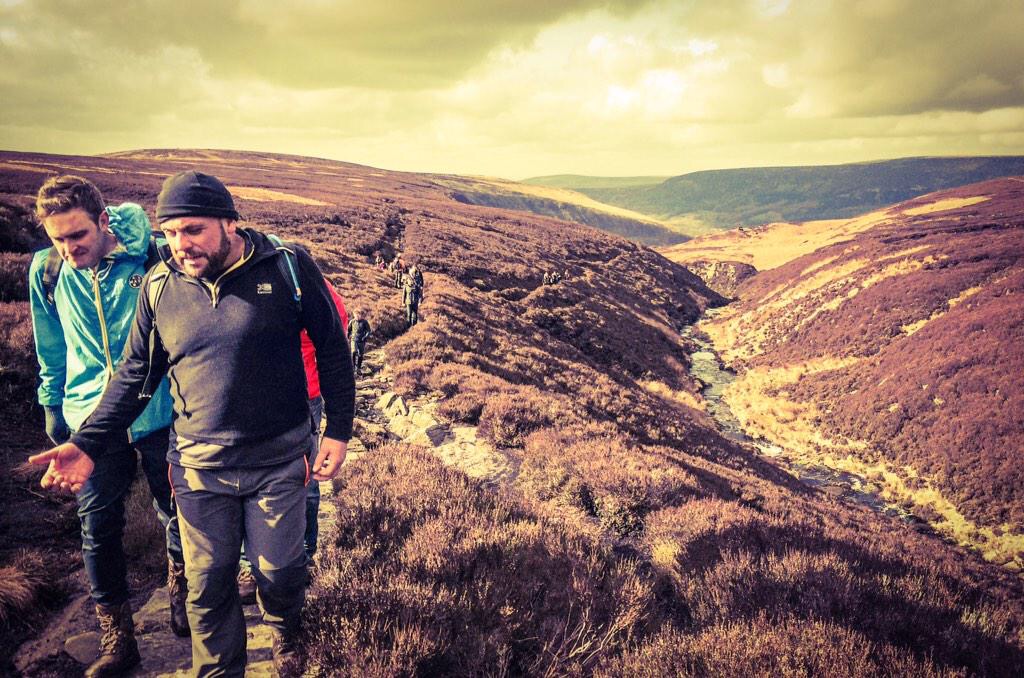 As always, as Glossop loomed large around 16:30, the usual suspects were to be found cracking open handy little tins of Gin & Tonic. Who’d argue with that? Thoroughly deserved. Though I kept my own hipflask intact, depriving myself until the ultimate reward of that first pint. Oh yeah.

And finally, we landed back at the welcome warmth of The Wheatsheaf where Bob & Irene Skupham and team were ready to feed and look after us. This cosy traditional village pub quickly filled up with our thirsty crew. I sat outside with my feet in a bucket of hot water, to the amusement of others, after an argument with a deep bog. But what a way to enjoy your first pint. Thanks for that go to Mick Howard (Urban Bubble).

With more punters wanting grub than dining spaces on tap, it was going to be a task and a half to organise the food pouring out of the kitchen. So step forward Jess Wilkinson (Weber Shandwick) who ably assisted and co-ordinated various plates of delicious home-cooked food to their rightful devourers.

Before the serious drinking session started, beautifully chaired as always by Steve Bottomley (Sagacity), I thought it best to do something useful with the amazing range of outdoor clothing, kindly donated by the fantastic team (thank you, Thomas Coxon) at Sprayway UK, only based up the road in Hyde.

I laid the gear out and requested a nominal donation of £10 per item to Glossop Mountain Rescue in return for a pick of the products on a first come, first served basis. Jim Clark (Apprentice Academy) deployed every last drop of his market trader skills to shift all the clobber and raise £120. Del Boy would have been proud.

The night went on and on. Aside from those already mentioned, special mentions go to Richard Gahagan (We Are Adam), Matt Smith (BDB Marketing), Will Jarvis (MRJ) and Jen Smith (JMW Solicitors) for keeping the Netwalking spirit going through to more or less last orders.

Also a huge thank you to Julie Wilson (Rule 5) who works actual magic with filters and Danny Franks whose excellent photography I’ve used within this blog.

But in truth, a huge heartfelt thank you to ALL attendees. Every single one of you made a stunning contribution once again to a fabulous day. 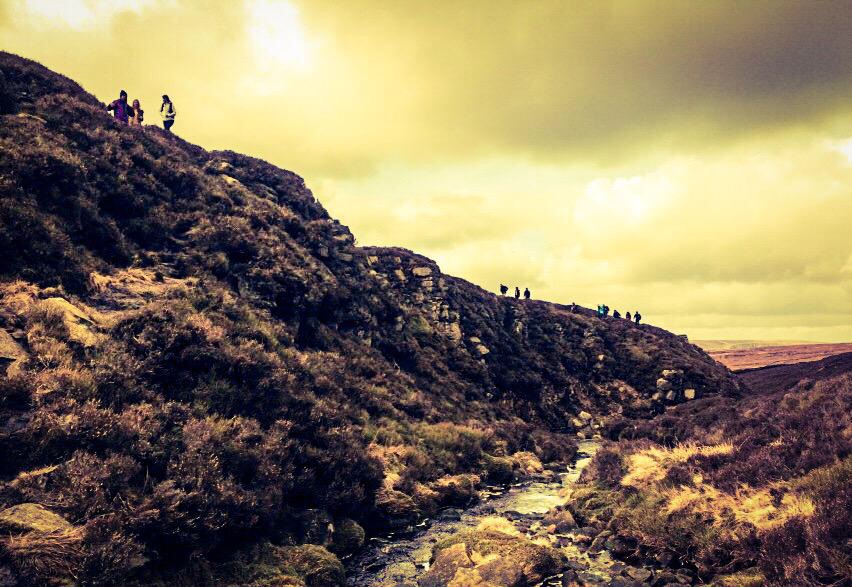 The exercise, scenery, fresh air and lack of distraction allow the brain to function at much higher levels than a normal working day. Furthermore, the tangible solitude of the Peaks facilitates a much deeper level of intimacy with fellow attendees than a city-centre hotel or bar can afford.

Running a business can be a lonely place. Stress can creep up on anyone and we all owe it to ourselves to have a release. Netwalking creates this escape from the rat-race allowing proper time to consider personal and business direction. It’s a chance to make game-changing strategic decisions and have the opportunity to bounce them off others. It works.

If you are interested in attending future events, please contact Michael Di Paola  on michael@freshwalks.co.uk and I will add you to the database.