We Came, We Saw, We Kinder Conquered

A rollercoaster week of logistics as Freshwalks squared up to its first rail strike and came out fighting. There was no way our planned tribute to the Mass Trespass of April 1932 was going to be compromised, even if the day was morphing into a Planes, Trains and Automobiles movie tribute instead. In the end, once revised schedules were announced it was a simple case of taking a train to New Mills Central and a hired minibus ferried our Manchester contingent into Edale – with many Freshwalkers opting to drive straight there.

Sam Jones rocked up to Carluccio’s for breakfast, as always, laughing in the face of official clothing and equipment recommendations. Adidas tracksuit top, jeans and trainers. Fashion over function, bless him. Needless to say the person who comes up with the official clothing and equipment recommendations would later have the last laugh as Sam took the ripped jeans look to a whole new level in the pub.

A good few Freshwalkers hopped on the 8.36am train to New Mills Central where a couple of other regular faces, Simon Anderson and Gareth Lancaster joined us on the short 16-seater minibus transfer. So a touch later than ideal – just before 10am – the entire group eventually congregated in the main car park of Edale village. There was a real buzz in the air with familiar faces swarming all over the place and little pockets of group chatter breaking out. It felt like a healthy contingent and indeed, everyone who was supposed to be there had turned up. 35 of us to be precise. Amazing for such a challenging day ahead. To rewind slightly, the plan for the day was a 30km entire loop of Kinder Scout – the highest plateau in the Peak District. And by a good few kilometres our longest route to date. 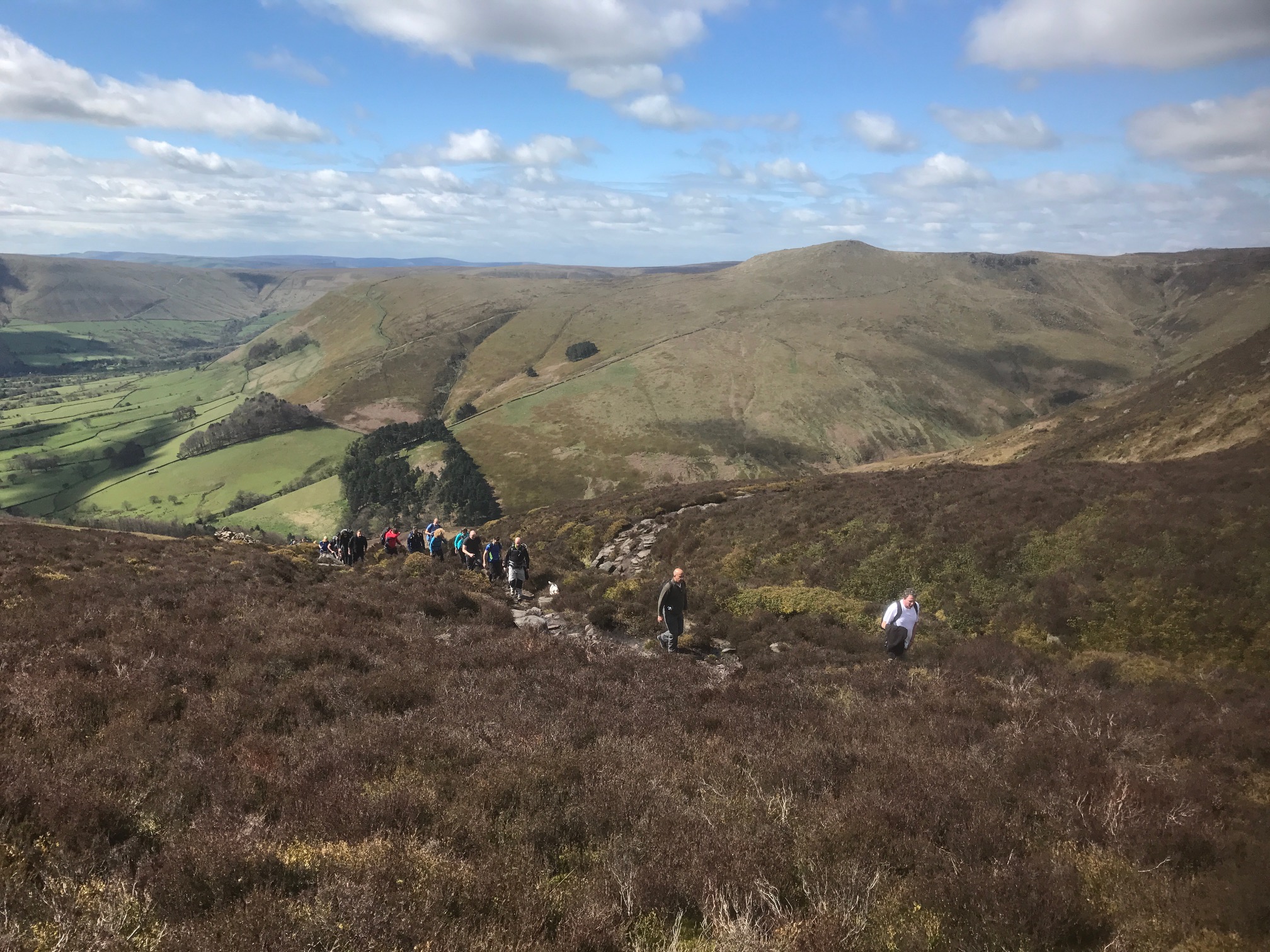 Recognising the long day ahead of us, we set a medium pace heading up onto Kinder Scout via possibly the quickest route available to us. Instead of scrambling up Grindsbrook Clough, we veered north in the direction of Ringing Roger following a steep zig-zag path that eventually brings you out on the edges of the plateau around 40-45 minutes later. At the top, if the breath wasn’t taken away by this harsh start to the day it almost certainly was by the stunning views of the Edale valley, gloriously lit up on this sunny April morning.

And for the first time ever on a Freshwalks we ventured east, moving anti-clockwise around the edges of Kinder Scout into unchartered territory – well, for us at least. Acknowledging the late start to the day, I immediately revved up the front of the group to start the clawback of time. There were plenty eager to force it too. Alongside me, Kristian Burrill, Owain Thomas, Peter Baker and Gareth Oakley were all jostling for a share of the early lead. And not too far behind, Barry Lowe, Ben Robinson and back in the hills, where he belongs, Chris Fargher. This was a solid group of pacemakers and along this obvious path on the south east reaches of Kinder Scout we started to make inroads. 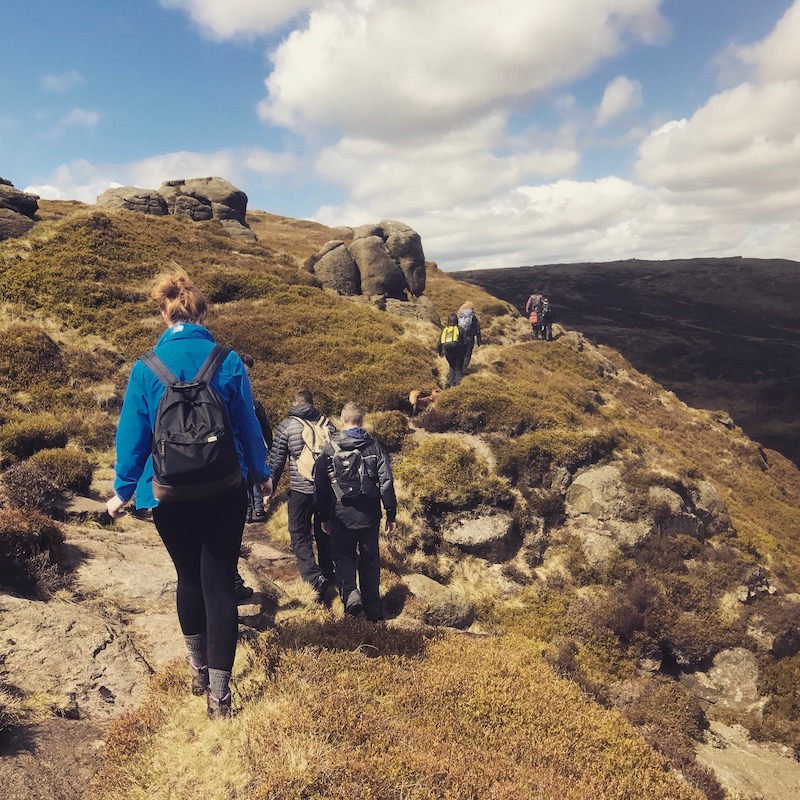 As we veered north towards Crookstone Knoll, the sheer number of us started to become a factor as our big group started to break up into much smaller factions. Moreso, when we moved from definitive paths onto peat and more challenging terrain – all the while, the north edges looming large. I must point out that despite the male dominance above, three of the girls – Alison Glennon, Sue Waxman and Caroline Sherwin-Darby – were more than holding their own and making good time too.

A word right here for Mike Potts who volunteers for the local mountain rescue unit and kindly offered to rear marshall for the day. Mike was a valuable support all day long keeping a beady eye on the whereabouts of back markers as I led from the front. Genuinely peace of mind.

We eventually took a well-earned lunch break in a sheltered spot along Seal Edge, just a little short of the waterfalls I’d eyed up on the map beforehand. But needs must, tanks were running empty and there was unanimous agreement once a lunch stop shout went up.

It’s almost impossible to capture the essence of the north edges of Kinder in either words or photos. The truth is – you are staring at quite possibly a hundred square miles of land and there’s not a single human being or barely a sign of civilisation in sight. It’s wild, it’s untouched, it’s captivating. It most definitely helps make light work of what would be arduous slog without such visual motivation to our right hand side. 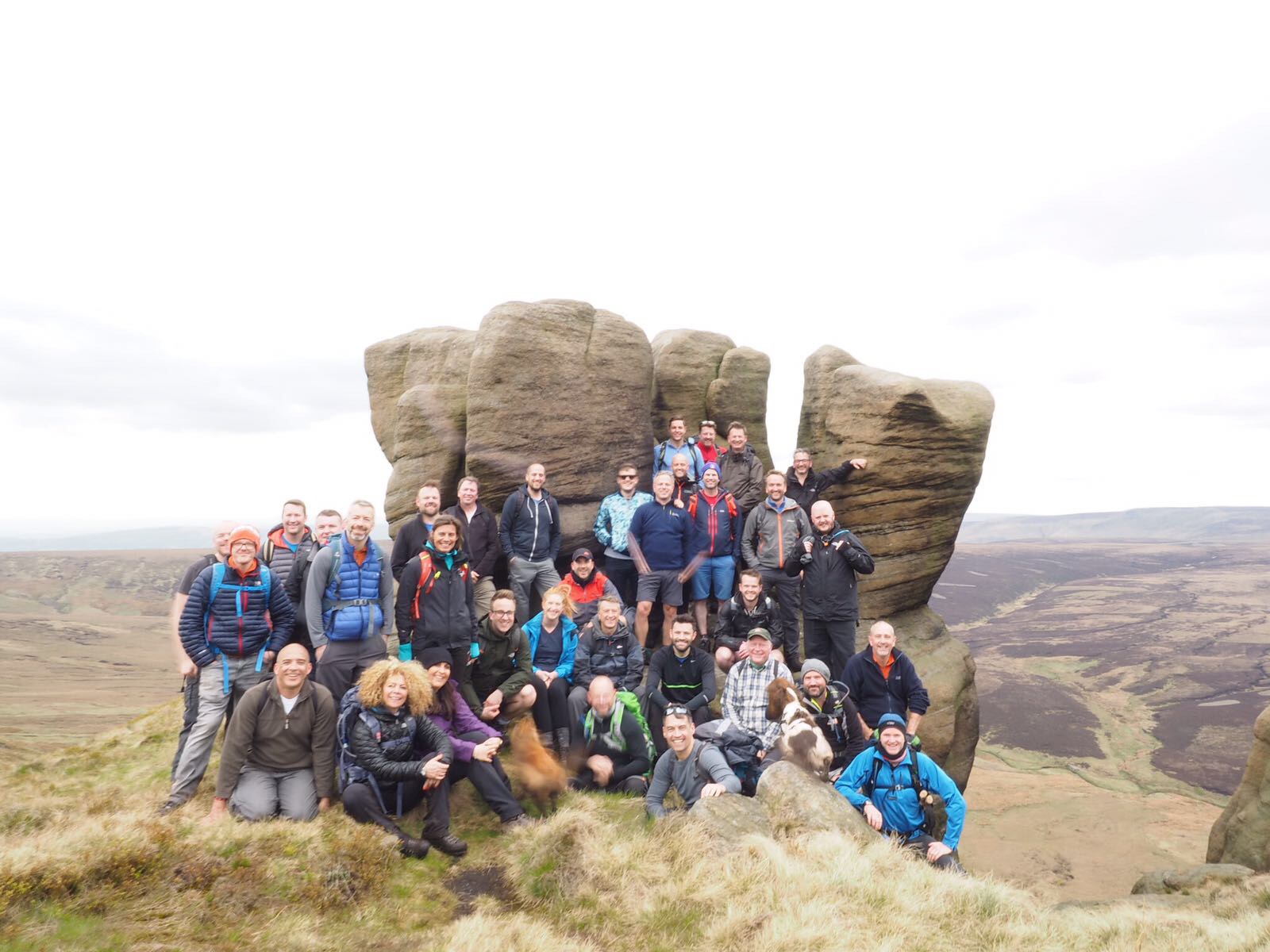 Past Fairbrook Naze we headed and the obligatory team photo courtesy of Katya Willems. Arriving at Kinder Downfall around 4pm was a strange experience compared to our usual lunchtime stops. Jamie Scahill and Richard Gahagan, sprawled out on rocks, looked ready to wild camp for the night and energy levels appeared to be in freefall elsewhere too. After all, we’d usually be supping our first ale by now. Not long now – well, just a couple of hours or so. Blimey, this was tough indeed.

Once past Kinder Low, it was homeward bound as flagging spirits picked up. Now, the group chatter was very much focussed on that first drink and how good it was going to taste. But descending after such a long day puts stresses and strains on joints and Jacob’s Ladder was testing us all to the max. A bit more pain first, lads and lasses.

The front of the group had now been given the nod to press full-steam ahead to the pub – it was truly every man (and woman) for him or herself as I held back and made sure everyone took the crucial left turn at Upper Booth along the Pennine Way.

Back outside the Old Nag’s Head, and handshakes and hugs were being shared all round as it had been a tremendous effort by everyone. Nobody wouldn’t feel that effort the following day – in fact some would feel it days later.

I’d made the best decision of the week to book a B&B and stop over in Edale. This didn’t feel a great decision when I had to walk another 2km to go shower and change but this freshener definitely extended my evening to last orders.

The Old Nag’s Head was a sheer bloody joy as plates of stodge were devoured and pints supped with fervour. Debates around the day raged for hours before ultimately a cats or dogs debate escalated. Barry Lowe asked Gareth Oakley to step outside the pub for a settler. Lads, calm down. The settler? A 50m sprint – the grandest of outside-the-pub duels. The result (in the dark) is still unclear now but camera replays seemed to indicate a victory for Barry Lowe.

It had been an epic day in the Peak District, as always, and without a doubt we’ll plan another challenge walk for sometime later in the year. A massive thank you to the sponsors Adam Recruitment who made a day like today possible. In the meantime if you fancy joining a Freshwalks event, please keep an eye on forthcoming dates via this website or contact Michael@freshwalks.co.uk – Everyone is welcome! 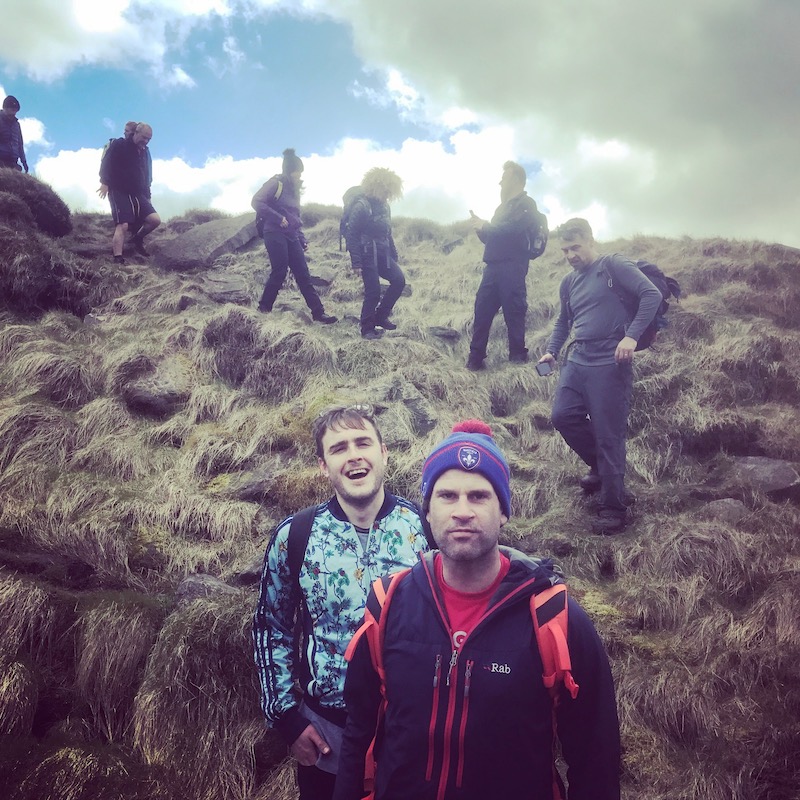