Slide Away (and Give it All You’ve Got)

Due to a busy March diary, this was a relatively quick follow-up to our last hike across the Kinder plateau, when over thirty Freshwalkers yomped from Edale to Glossop only a fortnight earlier.

Nonetheless, another twenty-four hardy but expectant souls gathered outside Glossop train station soon after 10.15am, ready for anything Bleaklow could throw at them. 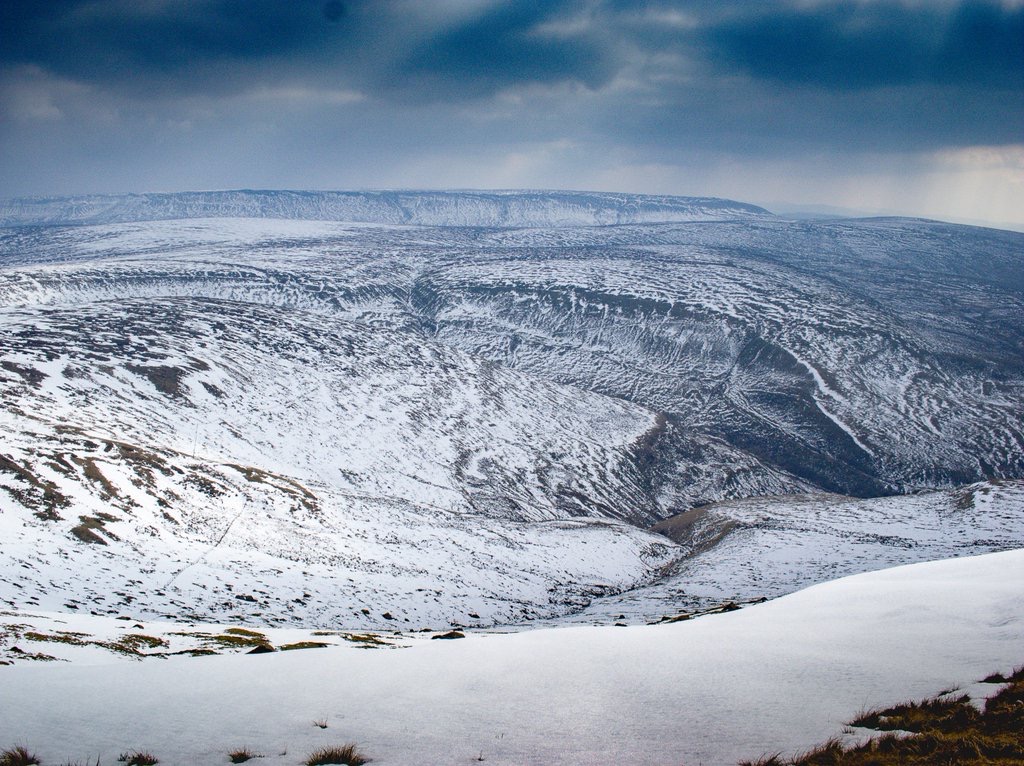 There was a nostalgic feel to the crowd with quite a few of the original walkers from August 2014 in attendance. Stalwarts Chris Marsh (UKFast), Jim Clark (Apprentice Academy) and Gareth Burton (Burton Beavan). And back for the first time since that inaugural walk, Kirsten Duffill, now working for Nike in London.

We made our way out of Glossop, snaking towards the now infamous Lightside ascent. It didn’t really help that I’d been ill all week but I wasn’t the only one grumbling up Lightside. At the top of the initial steep bit, we regrouped, and the unanimous verdict was “I don’t remember it being that tough”. Crikey, it knocked the stuffing out of a few of us. 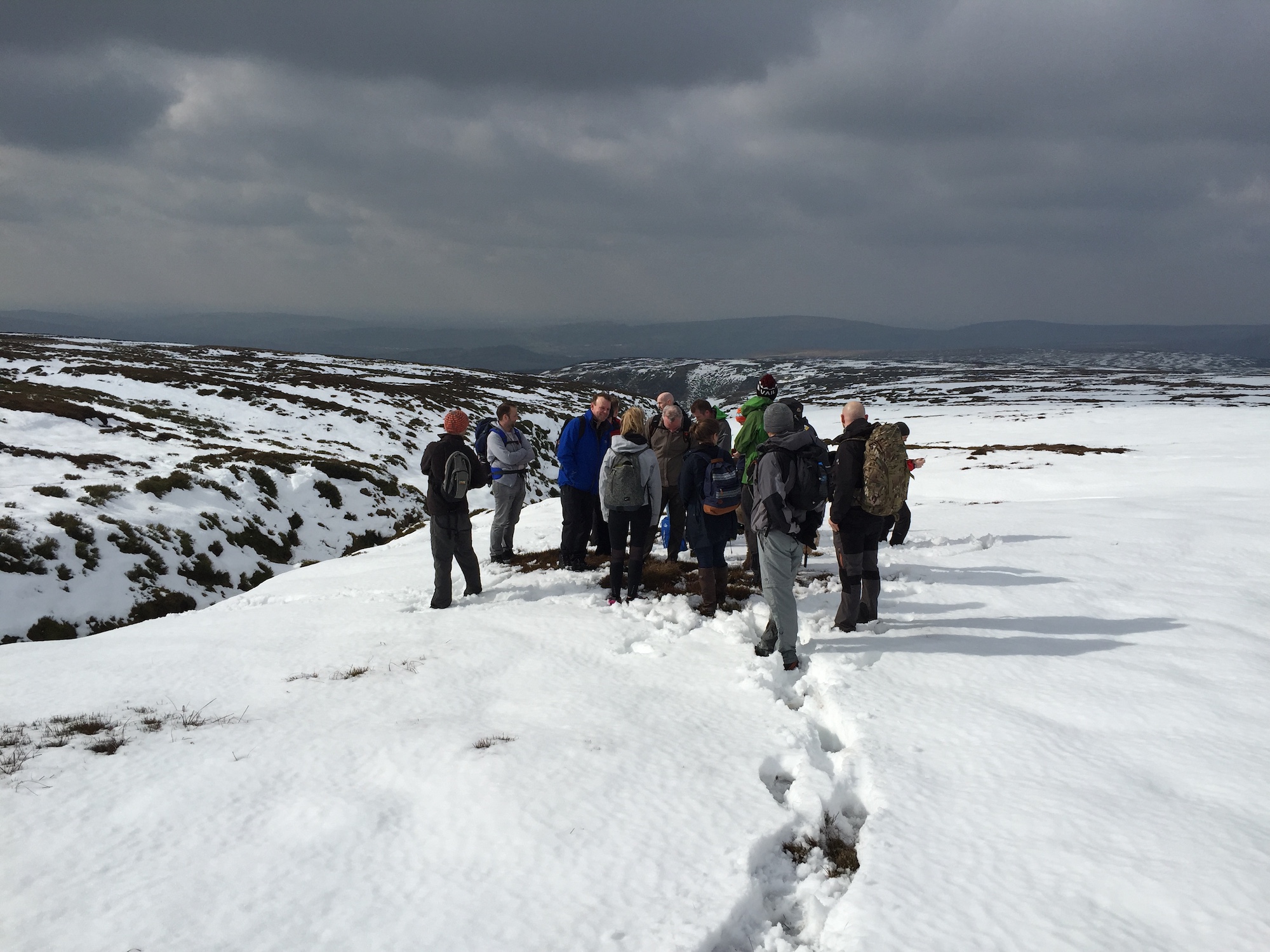 It felt quite mild and the group had, in the main, quickly delayered given the rigours of Lightside as we headed further up towards Yellowslacks. Suddenly the muddy, boggy slopes turned to an inch of snow. And then another inch. And then about half an hour later as we hoped to reach our usual lunch destination, even more inches. Eventually enough inches to make us miss our resting place. We continued along the flow of the icy brook and the snow got deeper and deeper. It was damn hard work and no surprise to discover we were best part of 45 minutes behind schedule by lunchtime.

With a few stragglers due to an unsuccessful lost mobile phone search, it became obvious that we needed to revise our route plans and give ourselves an easier time of it. Spirits were just about high enough as we tucked into lunch but past experience tells me there is a fine line between people enjoying a challenge and people ready to throttle me. 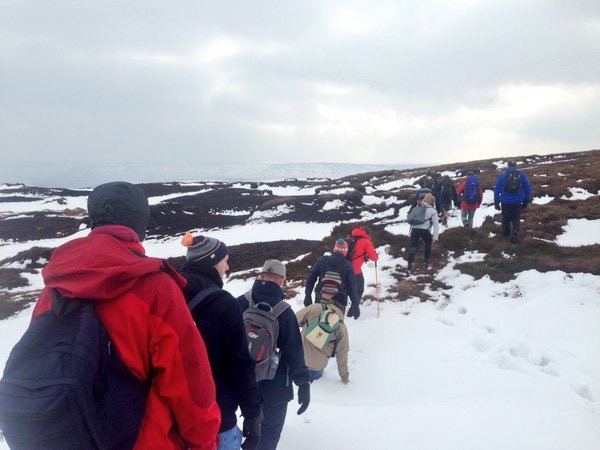 Our decision was to miss out on Bleaklow Head – it would have been an attritional slog across boggy moorland covered in knee-deep snow. Instead, we pursued a similar course of action, towards Higher Shelf Stones, except it was taking us closer to heading back home.

At this stage, Gareth Burton and myself waded ahead, hopelessly trying to predict the path of least resistance. Instead, often dropping down to thigh or close to waist depth in the snow. We could still see the funny side and battled on. Behind us, many were looking to use freshly laid indentations as a means of reducing snow intake into boots.

The majestic views off Higher Shelf Stones and the nearby B29 plane wreckage never fail to impress. An entirely different feel to last November in the eerie fog but still moments to reflect and savour in equal measure.

And finally, it was time to consider our descent back towards Glossop. We headed across to Lower Shelf Stones and then our expert guide for the day, Phil Hartshorne (Ticker) assessed the appropriate moment to descend. Alas, our usual paths were covered in powder and we veered off the perfect route once or twice. This was getting fun.

But mere hurdles don’t stop Jim Clark and his dog Jess. In a moment of inspired genius, Jim took to his backside and hurtled down the hillside. Sledging with nothing between backside and mountain. With a smooth path now cleared, it looked incredibly tempting as Jessica Wilkinson (Petal & Co.) was first to follow. Then one by one, the group took the brand new slide option over the now boring walking one. Much easier on the knees too. Grown people then trudged back up the hillside to do it all over again. A classic Freshwalks moment. 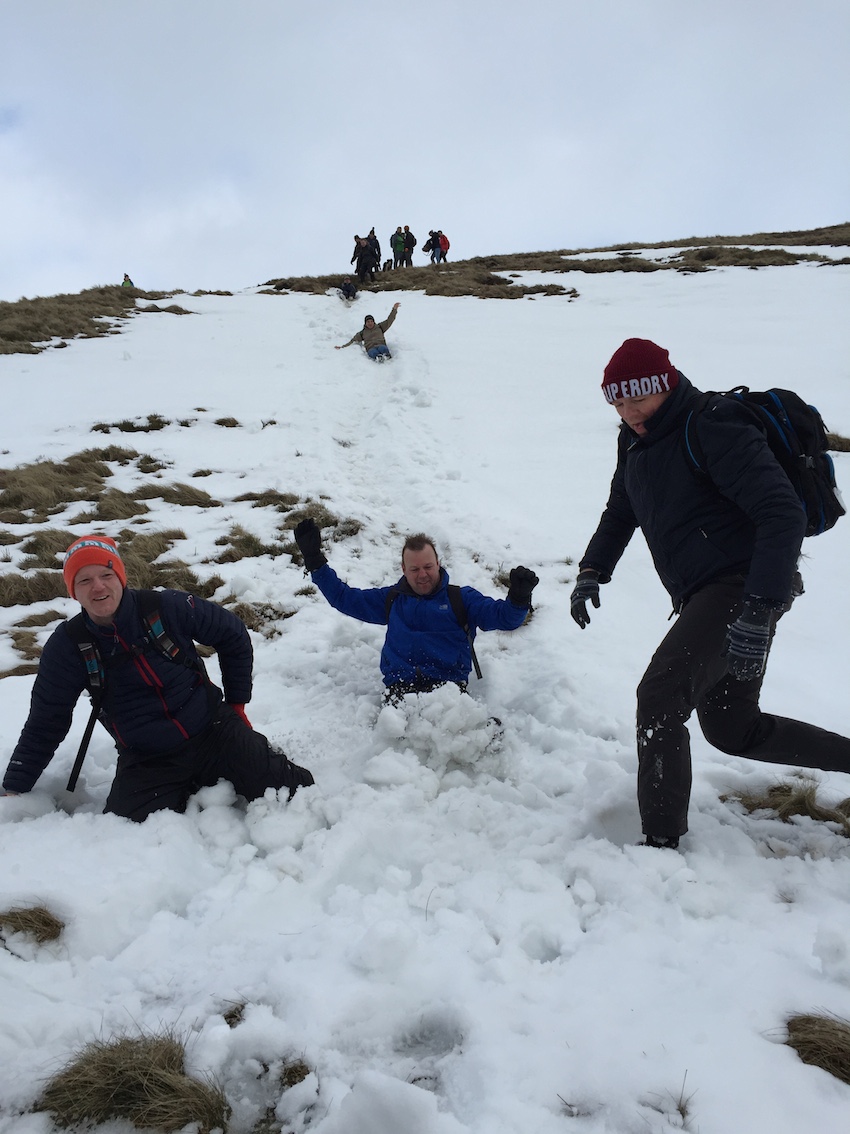 Any grumbles about frozen toes, snow being everywhere the sun doesn’t shine and the attritional nature of the route evaporated in the laughing around those moments. It also made the last leg of the day, heading back to the pub much more light-hearted than it might have been.

Back at The Wheatsheaf for Diane and John’s final Freshwalks before a new landlord takes over and for the first time ever, the group were straight into the dining seats as if to say “feed us now, we’re cold”.

It had been another classic walk, the best yet in many an opinion and a few pints later, this amazing bunch of Freshwalkers were heading home for much deserved hot bathing and sleep.

If you like the sound of the above and fancy joining us on a future Freshwalks event, please email Michael Di Paola on Michael@freshwalks.co.uk to be added to our database.