The day had arrived. I attend and organise plenty of events but I’d really been looking forward to this one. Netwalking or Soxy Netwalking (the Business Club with Altitude) as Michael Taylor had originally christened it, was finally upon us.

Here we were, ready to cajole many a soft urban backside up the unforgiving slopes of the Dark Peak, from Glossop to the harsh moorlands of Bleaklow. Would we all survive? 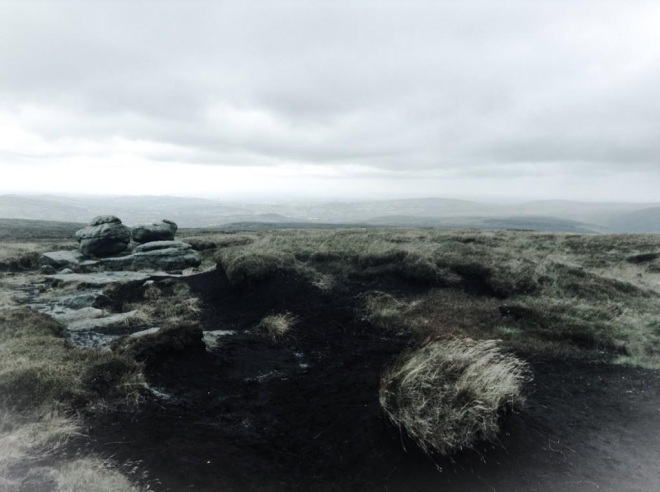 Days like this are often shaped by the people involved and I was quite excited by the group we’d put together. A healthy cocktail of sectors, seniorities and personalities with a few unknown ingredients within. Brilliant. I could see so many obvious and mutually beneficial potential relationships yet wanted to let these unfurl organically throughout the day, rather than force anything.

Like others, I’d spent a few days pondering various weather scenarios and clothing choices but now, we were simply ready to ramble. Hail, rain or shine. The last being highly unlikely.

The first official designated meeting point for half the inaugural Manchester Netwalking crew was Carluccio’s at Piccadilly. The rest would head straight to Glossop and meet us off the train.

It was a cracking start to the day as coffee flowed freely and shiny new boots with labels still attached were compared. Gary Chaplin was always going to win any competition involving coffee and labels mind. Stomachs were then grease-lined with various breakfast combinations of eggs, pancetta and mushroom, before we all made our way over to Platform 2.

Everyone who should’ve been on the 9:46am out of Piccadilly made it in time, including Jim Clarke’s (Apprentice Academy) dog, Jess who would later prove to be one of the stars of the day.

The odd hangover aside, spirits were as high as I’d hoped. With the likes of Sam Jones (Tunafish Media) and Gary chirping away, it was unlikely to be a dull journey and so it proved. The highlight being Sam’s physical interpretation of “LOL” – he has many apparently but demonstrated his favourite three to the group, mostly involving L shaped hand motions.

As we disembarked at Glossop train station, the entire group was finally together (and that’s how it would stay). The Glossop meet-up crew were all present, ready – and seemingly dressed much warmer than the Manchester crowd.

What did they know, we didn’t?

You could now sense the shared common purpose amongst this cheery, optimistic group of twenty-six. The excitement levels cranked up a notch and after a few last chance saloon toilet visits, a quick clap of the hands from yours truly and bang, we were off.

The ‘netwalkers’ were supremely led from the front by Glossop’s finest, Thom Hetherington (Holden Media), who’d originally championed the very idea of us trekking out from this part of the world. Now, this was hardly an Olympic bid process but Thom pitched Glossop perfectly. There was plenty to live up to.

Once out of Old Glossop, the first section of the day up the grassy, then heather, slopes of Lightside gave a few of us an initial baptism of fire. It was steep, it was lung-bursting. It was saying “Michael, you really should have stayed in last night, you idiot.” 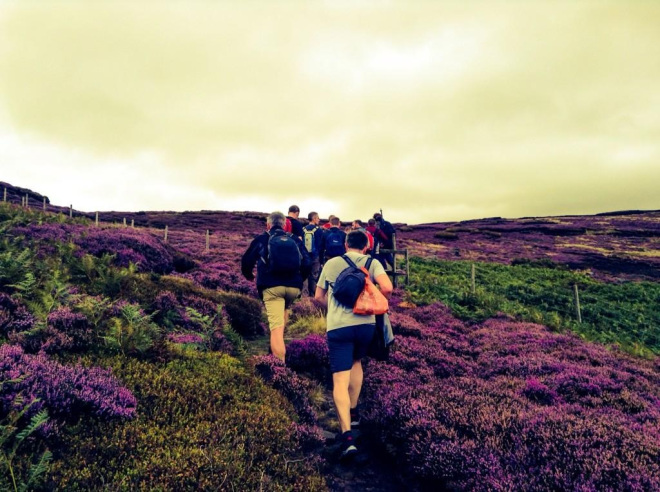 As chests beat harder and legs moved into gears, intentionally reserved for later on, I’m sure at least a couple in the group were thinking how on earth they’d sustain a predicted six hours of this level of intensity.

Layers were being removed and added all along the nearly single file gang as we tried to adjust to the evolving body temperatures. Sweat on, sweat off tactics, I described it. 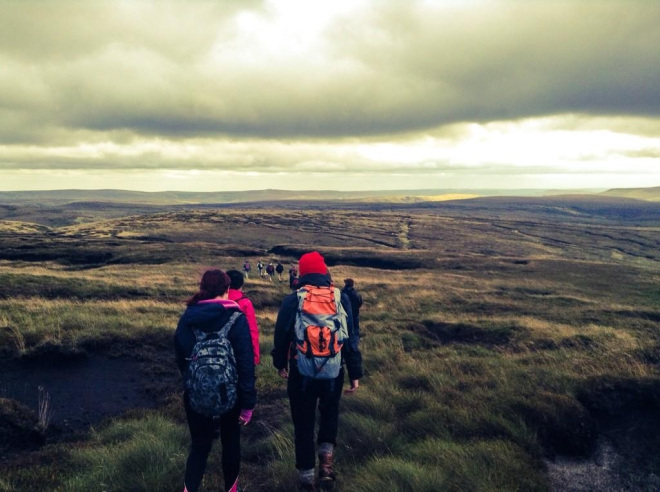 The next section was unquestionably the first but certainly not last exhilarating experience of the day. As we navigated a route that took us very close to a sheer drop on the right hand side, the dangers were partly negated by the fiercest of winds blowing us in the direction of safety. Concentration required for sure but the entire group navigated safely.

Best of all, the few of us (who’d partied the night before) quite literally had our hangovers and tiredness blown away by the ferocity of the wind. Once we entered less-exposed territory and could sense-check our feelings, the additional blast of oxygen had worked it’s magic. All of a sudden, I felt on top of the world, as we continued our ascent.

It wasn’t much further until the most perfect of lunch-stop locations. “School-tripesque”, as wonderfully described by Julie Wilson of Rule 5 (who is responsible for most of the photos used here). We were only ninety minutes in but it made complete sense to take advantage of this sheltered, rounded semi-amphitheatre of carb-loading and conversation. And we wouldn’t be Soxy Netwalkers if there weren’t some PR and legal types gorging on sushi instead of egg butties. 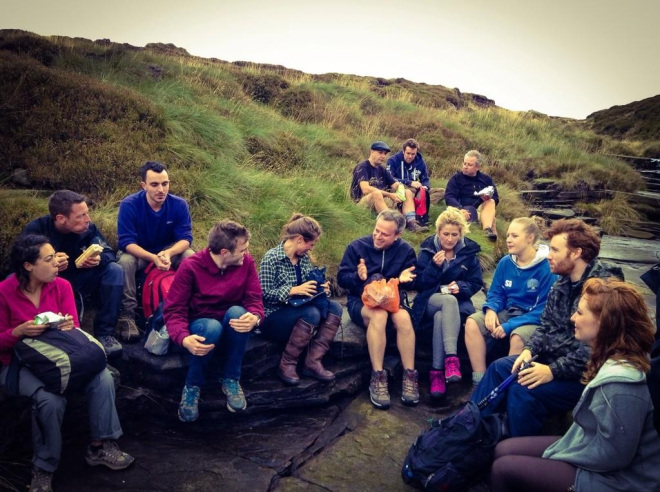 With the harsh realities of the moors only just ahead of us, all of a sudden, the stark contrast between the togetherness of the group and the solitude of the landscape began to really strike me.

Refuelled, we continued our mission towards Bleaklow, the second highest point in the Peak District, We were lucky. The rain kept it’s distance long enough for us to trudge through the peat bogs, without too much fuss, to the flat summit. Visibility never became an issue and we had the added motivation of being able to see our target rocks the whole time.

The summit was a genuine moment to cherish. Admittedly, Bleaklow is no Snowdon, let alone an Everest but it didn’t matter to this group. On this day, it was OUR Everest.

After some reflection time, we then intentionally headed for the quite remarkable sight of the locked in time, plane wreckage of a B-52 Superfortress that crashed there in 1948. I could only imagine this place on a misty day, but it was still a haunting vision of a past tragedy.

The day was now poised to go rapidly downhill (if only in altitude) but a quick peak over Higher Shelf Stones was one final lofty necessity. More wind. More awe-inspiring views. And chiselled names in the rocks dating back hundreds of years, another impressive feature. We should’ve stayed a bit longer but in truth we were now racing against the bad weather moving in.

The descent back into Glossop was a glorious trek along an old Roman route, called Doctor’s Gate. Stunning valley views, the background sound of trickling streams and none of the earlier navigational worries. 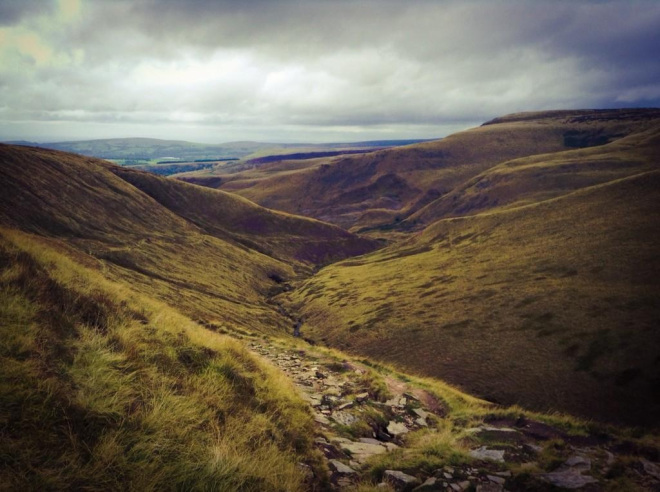 After the ‘tricky to talk’ initial gasp-inducing and windy sections, it was becoming increasingly easier to move up and down this human snake of walkers and chat freely. The group would oscillate back and forth like a coiled spring, with serial pacemakers forging clear, but always then happy to drop the pace and regress back into the group. It was an impressive feature of the day that all twenty six knitted together so closely.

As we approached the outskirts of Glossop, the lovely Yorkshire gals, Jessica Wilkinson (Weber Shandwick) and Kirsten Duffill (DAC Beachcroft) truly stepped up to the plate with their pre-meditated gin and tonic planning. Oh, they knew.

Close by, as though trained to be in these situations, myself and Gary Chaplin lapped up the spare can like it was our first taste of liquid in months. A can of gin and tonic never tasted so good.

Within minutes, we were back in Old Glossop, a quick kiss of the pub doormat later and the troops had arrived at their destination. An hour ahead of schedule quickly translated to an extra hour of supping. And what supping it proved to be. The Wheatsheaf in Glossop is a fine pub with a fantastic landlord. Some cracking pints of ale and as it transpired a little over an hour later, food to match. Many of the group opted for Steak & Ale pies, others the award winning Sausage & Mash. All hearty fare and there were a good few sticky toffee puddings flying about the place too. 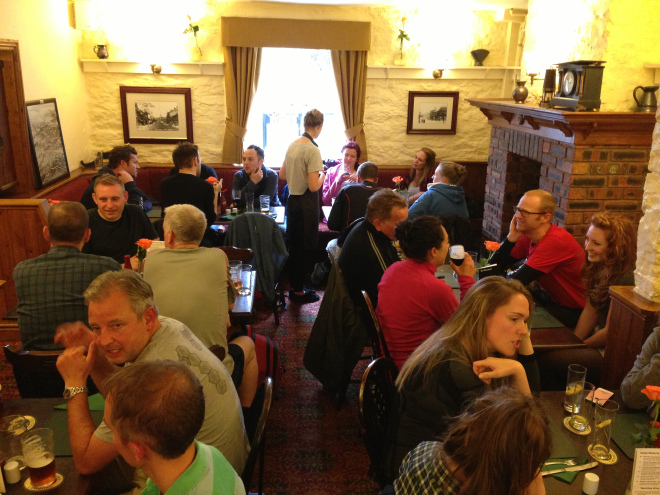 The magic moment the heavens opened not long after we’d found the warmth of the pub will remain with me for a long time. Many of the group stayed for hours, embracing the local hospitality, digging even deeper with each other and further prolonging this fantastic day.

A huge thank you to Michael Taylor for planting the seed of an idea and Thom Hetherington for his all-round outstanding ‘Glossopness’ and leadership skills in the hills.

Other special mentions go to Chris Marsh (UKFast) for capturing the day so well on his camera and for being a true gent alongside Nigel Sarbutts (Local Brand Partners) as rear group marshalls.

But equally, a huge thank you to ALL the netwalkers. You all contributed energy, optimism, humour and warmth. I’m truly privileged to have spent the day with you all. Till next time, comrades.

PS. We’re already planning the next day out, potentially October. Probably Glossop to Kinder this time. Let me know if you’re interested and I’ll add you to the email list.