There’s quite simply no better way to end a week than hitting the great outdoors on a Friday morning and it felt like this fourth Freshwalks event was long overdue after an immense turnout at the end of February.

Effectively a sequel to the Netwalking trilogy that had gone before, the new Freshwalks name was devised to avoid confusion with other similar events and to better reflect the purpose of the day. 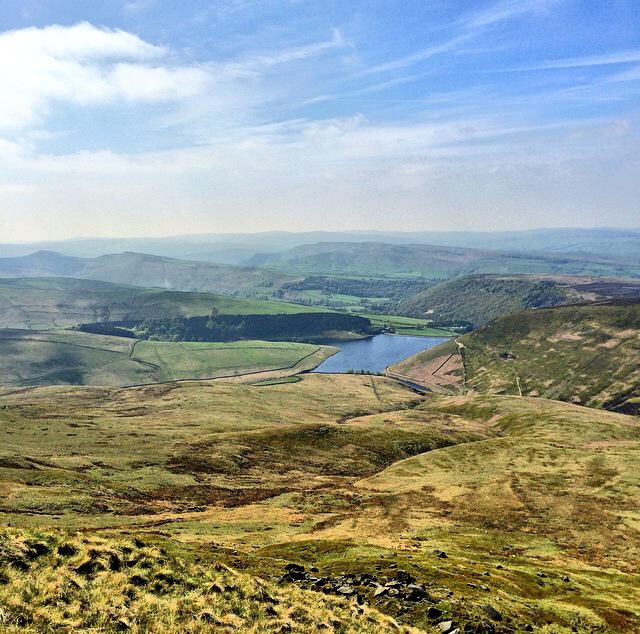 I hadn’t been quite this nervous since our inaugural walk back in August but there were a couple of obvious worries the night before. It was our first trek without usual navigator and local Glossop lad, Thom Hetherington, a problem compounded by one or two other familiar and reliable faces on the unfortunate absentees list. Secondly, our regular pub haunt, The Wheatsheaf in Old Glossop, had changed management after Bob and Irene Skupham had moved on. We’d been looked after so well by the Skuphams and had developed absolute trust in their hospitality standards.

Ah well, que sera sera. I’d studied the maps well enough and Diane, the new landlady sounded keen to help on the phone. “Nothing has changed” she assured me. We’d only given 2-3 weeks notice of this fourth event and were relatively surprised to get as many as 26 people signed up. A smaller crowd would be the best way to test the new management first time out I had supposed.

As is now tradition, the early morning Manchester contingent gathered upstairs inside Piccadilly train station at the reliable Carluccio’s where eggs, pancetta & coffee appeared to be the order of the morning. First to join me were the Inleaf team of Daniel and Charlotte Atherton on their first walk with us.

Fifteen people and three dogs (Jess, Sid and Vito) left Manchester on the 8.45am train, excited about the exertions ahead and breezily optimistic about the weather forecast in front of us. The temperate gods would appear to favour your average Freshwalker. We joined the Glossop crew, including another first time walker and ex-pro rugby player, Jonnie Whittle, Managing Director of Lasenby Knox, at the train station cafe, before a party of 21 walkers set off a shade after 9.30am with undoubtedly a long hard day ahead. 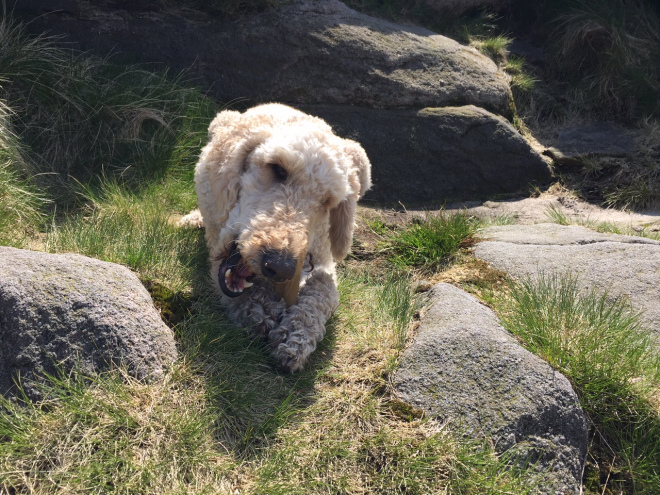 Jamie Helmer and Pete Bridge-Collyns, Managing Directors of ITA Accountants and Cleaning Ventures, respectively, emerged as two natural leaders of the pack as we snaked our way out of the town centre to steeper and more rural settings.

Between the three of us we just about had enough navigational nous to steer us competently throughout the day. And the earlier worries dissipated as soon as we hit the first recognisable trails.

Heading south-east out of Glossop, our initial slog up Worm Stones took us towards the first trig point at Harry Hut. It was a tough baptism of fire for some of the novice walkers as the group opened up a smidge. We briefly paused once or twice on this ascent and there were a good few huffing and puffing faces less than an hour into the day. I shared some little white lies of encouragement as to the task ahead. Positive spirits get legs moving and lungs opening no end.

We shifted eastwards to pick up the Pennine Way at Mill Hill, passing a now expected plane wreckage on our left hand side. This steady climbing was gradually breaking the resistance of a few and providing at least a stern test for the rest. Halfway through the ascent, halfway through the pain was my shared mantra.

After the brief respite of a slight downhill ramble, the killer section of the day was upon his. An extremely steep, borderline scramble to the top of the Kinder Plateau. “Don’t come near me, I’ll swing for you” was Charlotte Chadwick’s (Atlantis Digital) affectionate greeting to yours truly as we stopped for a breather close to the top. Fairly sure she was joking but I didn’t chance it.

The other reason for stopping was that poor Rachel Bell of theEword had gone over on her ankle and was now reduced to mere hobbling pace. Gutsy as anything “Don’t worry about me, I’ll be fine” she confidently declared. Sid the dog was doing a fine job helping to pull her along.

It wasn’t long past noon yet we were now within striking distance of our glorious destination at Kinder Downfall. The last time we visited, the waterfall was doing that remarkable thing of being blown upwards, such was the ferocity of the wind. This was a much gentler and warmer day however. 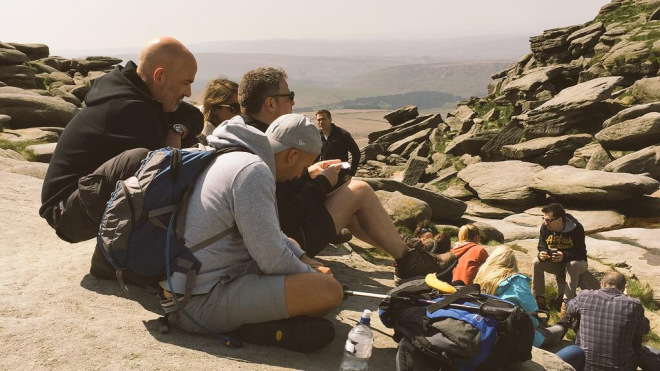 Kinder Downfall is the sort of place where you could stop all day and peruse the surroundings when the weather is kind. Simply stunning views and the gentle background noise of trickling water is a trusted way to iron out any corporate mental strains.

After a spot of lunch and a generous wedge of scenic admiration, we tactically split the group in two to allow Rachel a small escort back the way we had come. Special mentions for Jim Clarke (The Apprentice Academy) and Dave Greaves (Make Happen) for being such stalwart rear troopers. My forward party took a longer route, leaving the obvious paths to yomp due north across what looked like unpredictable moorland terrain.

It was loads of fun, with deep troughs that needed leaping or climbing into and within about 20 minutes we’d reached a perpendicular path running the edge of the opposite side of the Kinder plateau. The panoramic views across Black Ashop Moor were stunning and the rock formations afforded some spectacular photo opportunities well worth the detour before heading back west to meet the others at our agreed rendezvous point. 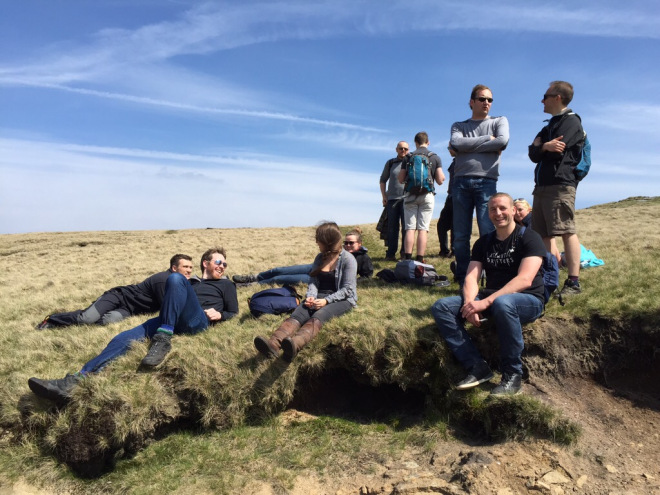 It was now just a simple case of the entire group plodding back to Glossop as we virtually retraced steps, all be it with the positive spin of an entirely fresh perspective. Every steep descent provided as much of a muscular examination as the earlier lung-testing respective climb. Weary limbs and tired minds now demanded refreshment as the town of Glossop appeared closer in our sights. Ex-pro footballer, Andy Holt of Digital Next appeared thirstier than most as The Wheatsheaf happily loomed large. I’d promised him 45 minutes max.

Not much later than 4pm, we were met with a warm welcome from Diane, the new landlady who herself was pulling pints of the local Howard Town Brewery ale behind the bar. And once a bag of frozen peas had been sourced for our plucky, injured comrade, conversations started to gather pace. Happy faces greeted plates of home-cooked food leaving the kitchen as energy levels were rapidly replenished. This particular group of walkers had a hungrier than usual look about them and when word got round that home-made cheesecakes (Malteser & Malibu/Bounty) were on the specials board a frenzied cheesecake fever gripped the dining room.

Most of the Manchester contingent headed back on trains throughout the evening but not before a good few rounds of sambucas and many more ales relaxed the vibe and increased the laughter levels. Another hugely successful day and a route so pretty, yet so demanding it would be sacrilege to not repeat this dose to an expected bigger crowd on Friday 19 June (TBC). 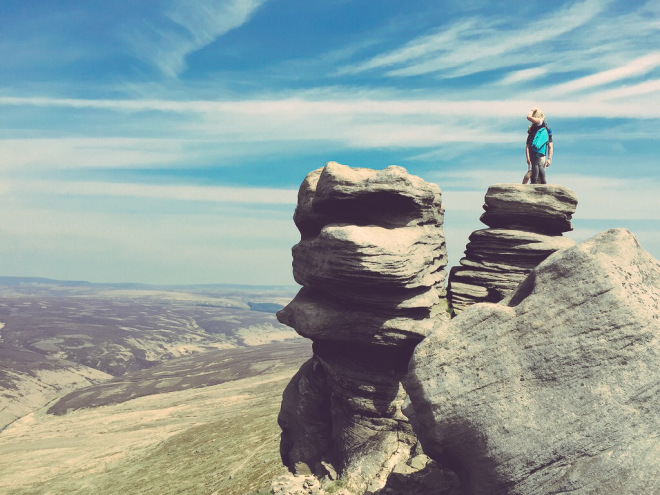 Finally: In a modern commercial world where technology gradually reduces our ability to switch off, it’s important you take time to look after your most important client project. That’s YOU. Demanding work and family lives put a strain on most of us and in particular the downwards-facing hierarchal pressure of running a business can be a lonely place. Mental health is an important business issue and our natural resilience can delay obvious reactions to any given situation. Like a time-bomb waiting to go off, stress and anxiety can creep into lives many months later.

Fresh air, fresh perspectives and fresh connections can align at Freshwalks to help alleviate the above pains.

If you are interested in joining a Freshwalks event, please email Michael Di Paola on Michael@freshwalks.co.uk to be added to the database.